Cuckoo clocks need to be wound either once a day or once a week. However, if the cuckoo clock is hung on the wall less than six feet high, the weights might hit the floor and will therefore cause the clock to be wound more often in the day or week. In fact, there is an interesting story about Thomas Jefferson cutting holes in the floor of his home so that the weights would not hit the floor and would allow his weight-driven clock to run longer. Yet it will not hurt the cuckoo clock if it is wound more frequently than it needs to be. Nor does it matter in what order the weights are pulled up. However, it is a good practice to use one hand to hold the cuckoo clock on the wall as the weights are being pulled up so that the clock does not fall off the wall. It is also a good practice to place a small marking on the wall where the case is after the clock has been running properly for a while, perhaps with a pencil, so that it can be easily determined if the clock moved on the wall after a winding. Indeed, it is important that the cuckoo clock be straight and level on the wall or else it may not run properly. This is what is know as "being in beat." The clock should have an even "tick-toc" sound. 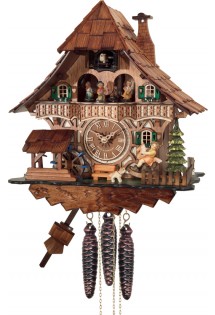 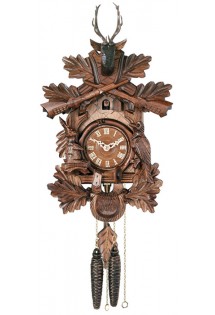 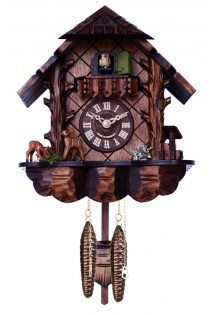