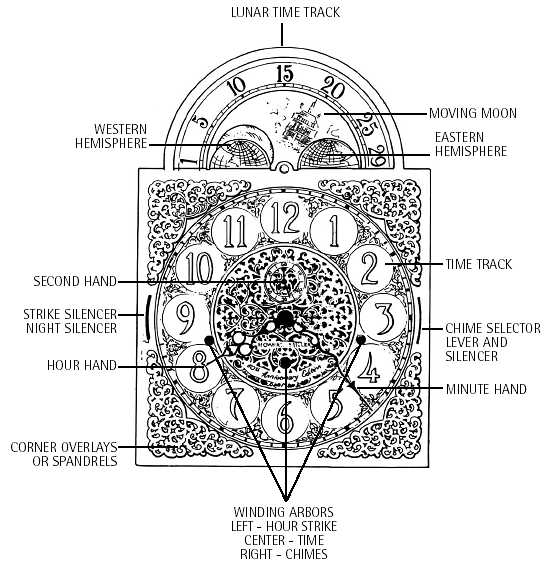 Weight-driven clocks are mechanical timepieces that are powered by the gravitational pull of heavy weights slowly falling down. The gravitational pull generally lasts for up to seven days, at which time the weights need to be pulled back up. The weights hang on either cables or chains and are pulled up by either winding the cables up with a crank that gets inserted into the holes on the front of the dial or by manually pulling up the chains. Most weight-driven clocks will also produce a chime. The example of a grandfather clock below illustrates this type of weight-driven movement with chimes.

The patriarch of clocks, the grandfather, are mostly weight-driven, mechanical clocks which are encased in a tall, wooden cabinet that acts as an echo chamber for a cathedral chime melody or other classic clock chimes. As the hand advances, the minute hand trips a star gear located on the center stem of the dial face. The point of the star gear lifts a pin that triggers the turning of the music roll (just as you would find in a music box).

As the music roll turns, it pulls back a chime hammer, which then falls back to its original position and strikes a chime rod, or in some cases a steel tuned tube. Most chiming, weight-driven, mechanical grandfather clocks have 12 hammers and rods. Yet a few select models have 16 hammers and rods. Still further, a very select few models have 5-9 hammers with steel tuned tubes. Mechanical wall and mantel clocks may only have 8 hammers in their triple chime movements and may also only have 5 hammers for their Westminster only movements. The chime rods, or in some cases steel tuned tubes, are cut at various lengths to produce different notes. These hammers and rods, struck in various orders, will produce the selected chime. Grandfather clocks with 12 hammers and rods will generally produce either the single Westminster melody or the selected triple chime cathedral melody of Westminster, Whittington or St. Michael's. Grandfather clocks with 16 hammers will generally feature the triple chime of Westminster, Shubert's "Ave Maria" and Beethoven's Ninth Symphony "Ode to Joy.

Chimes are selected by simply moving a lever on the dial face to the appropriate position. If chiming melodies are not desired, there are some weight-driven clocks that just feature a "bim-bam" tone or an hourly strike. Moreover, if rods or tubes are not desired, there are also some weight-driven clocks that feature coils or glass and metal bells. An easy way to visually determine if a mechanical weight-driven clock produces melodies or just simply strikes is by the number of weights. Generally, mechanical weight-driven clocks that feature a melody will have three weights, unless otherwise noted of course. The middle weight regulates the time, the left weight (as your looking at the clock) regulates the strike and the right weight (as your looking at the clock) regulates the chimes. The middle and left weights are generally the same weight. Yet the right weight is usually heavier because the chime side needs more power to produce the melodies, except for cuckoo clocks. However, if there are only two weights a mechanical clock will generally just produce a "bim-bam" tone or an hourly strike, usually with one or two hammers. Finally, if there is only one weight a mechanical clock may be just a time-only model, though there are some that still offer a half-hour strike or passing hour strike with one or two hammers usually.

Many weight-driven clocks, such as those found in grandfather clocks, will also feature a working moon dial. The moon dial tracks the 29-1/2 day lunar cycle. A separate gear on the center shaft of the dial trips a pin once every 24 hours which advances the dial one "click"/one day. The phases of the moon (i.e., new, quarter, half, full, ect.) are depicted through the Eastern and Western Hemispheres (1/2 circles located on each side of the moon dial) bisecting the moon through its rotation.

A special note should be made on cuckoo clocks, which are also weight-driven mechanical timepieces and are powered the same way grandfather clocks are. They are usually wound once a week, although some models need to be wound every day. Moreover, the time is regulated the same way by adjusting the pendulum. For example, to speed the clock up, the leaf of the pendulum is raised up. The reverse is done to slow the clock down. Although weight-driven clocks, such as grandfather clocks and cuckoo clocks, are very popular, so too are spring-driven mechanical clocks.

Spring-driven clocks are generally regulated with a pendulum or with the use of a balance wheel, which acts in the same manner as a pendulum. More sophisticated models will utilize a platform escapement in place of a balance wheel or pendulum. To speed or slower the clock, a screw is turned near the balance wheel in the direction of the appropriate indications or by adjusting the length of the pendulum.

A particularly interesting mechanical clock of note are the atmos clocks, which are simply powered by the earth's atmosphere. Although this is a unique power source, other forms exist to power clocks, such as batteries and electricity. For example, quartz, battery-operated, clocks are powered from electronic impulses that pass from the battery through a quartz crystal. Similarly, electric clocks are powered from an electric current. Most of the electric clocks made today are simply time-only models and do not produce a chime. However, there are quite a few quartz, battery-operated, clocks that offer a chime, the most common being the dual chime Westminster and Ave Maria melody clocks.

A final note should be made to mention that there are still other ways to power or regulate clocks, such as fusse-driven clocks like the popular Great Wheel, Grasshopper and Congreve Rolling Ball Clocks. However, there are few of these examples produced today and are a bit more advanced for this general discussion on clocks, which is produced for clocks offered and sold on our site only. Please refer to specific product pages for further product information or exceptions and consider this additional outside resource resource on how clocks work.